The inaugural REALTOR.ca Hackathon held from October 12 to October 14 meant the inside of Ottawa’s Bayview Yards innovation hub was filled with some incredibly talented developers and data scientists.

Not to mention lots and lots of coffee.

With a time limit of just 48 hours, teams were tasked with building and presenting a working demo that provides simpler, smarter and faster ways for buyers to find the right home on REALTOR.ca. To do that, the Canadian Real Estate Association (CREA) opened data sets for the first time ever, allowing the teams exclusive access to tackle industry and business challenges.

Organizers are calling the event a huge success, especially since the hackathon garnered participants from South and North America. Flavio Banyai came from São Paulo, Brazil, after being asked by his friend and business partner Derek Hooper, a REALTOR® and real estate professional from Ottawa.

“We’ve actually been working on an app over the last few months, and to get access to REALTOR.ca’s data was a great opportunity for us to put everything together,” Banyai said. “When you come to a hackathon, you must think outside the box and do your best to come up with the best ideas.”

Hooper said the REALTOR.ca Hackathon was a great catalyst to put their idea out there, to gain exposure and to receive feedback from the panel of judges comprised of industry leaders and REALTOR® members of CREA’s Technology Committee.

“It’s great CREA did this so we could really play with the data,” Hooper said. “Canada has been traditionally slower in real estate innovation, and for us to move forward we really need access to that data to build greater products.”

While she may not know the ins and outs of the coding world, REALTOR® Ayn MacDonald said she wanted to take part in the REALTOR.ca Hackathon to learn more about the state of the industry.

“This type of event could impact my future, so I thought it was important to get involved,” she said. “The highlight of the weekend, for me, was seeing all the pitches and the new ideas being brought forth.”

MacDonald said she believed her current knowledge of the industry gave her team some valuable insight on what both consumers and REALTORS® are hoping to get out of REALTOR.ca.

Good ideas aren’t the only thing born from hackathons. Take for instance Local Logic, a Montreal-based real estate data company that got its big break at a hackathon and is now used by CREA to power REALTOR.ca’s hyper-local neighbourhood data.

“The REALTOR.ca Hackathon was an opportunity for teams to put together a project over the weekend to help keep REALTOR.ca modern and agile in this everchanging world,” said Local Logic’s Aron Korenblit. “It gives these talented developers, UX designers, data scientists and entrepreneurs a venue to showcase what they can do.”

When the event ended, and all the energy drinks and coffee had been consumed, the consensus from the panel of judges was clear: the future of Canada’s real estate industry has some bright minds working behind the scenes.

And the winner is…

It wasn’t an ideal start for team propGram at the first-ever REALTOR.ca Hackathon. The group of friends from Toronto had just settled into their Ottawa Airbnb for the weekend when disaster struck: no Internet. “It was saying it would take two days to download a PowerPoint document. We were like, ‘Great, we’re back in the ‘90s,” said Bahar Eghtesadi, a 29-year-old data scientist with BMO Financial Group.

They decided to head to the event early the next day to try and make up for lost time, all the while curbing their expectations a bit.

“It wasn’t until we got closer to the end when we were more hopeful and thought, ‘Hey, we have a shot at winning this,’” said Maryam Moafi, a 29-year-old software developer with IBI Group.

After nearly 48 hours of coding and finetuning their idea of enhancing a consumer’s homebuying journey, the panel of judges announced propGram had indeed won the REALTOR.ca Hackathon. 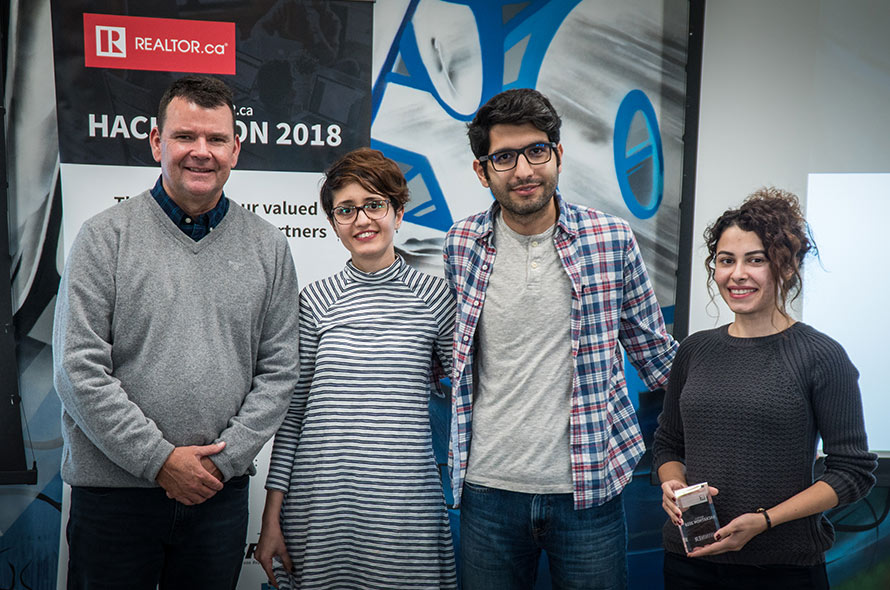 What set them apart from the competition, according to James Mabey, Chair of CREA’s Technology Committee, was propGram’s ingenuity, creativity and real-world relevance. Their demo was modeled similar to how Netflix is able to suggest new television series or movies based on your previous search or watch history.

“The simplicity of what they were proposing, using assets we already had, would allow us to really enhance the consumer experience,” Mabey said.

The team was made up of Eghtesadi, Moafi and Reza Farahani, a 29-year-old senior business analyst with TD. Farahani said while the three have been friends for a while—playing board games is a common pastime of theirs—this is the first time they’ve worked together on a project of this magnitude.

“I wanted to push boundaries of the existing market and seeing your team help you reach your goals is pretty exciting,” Moafi said. “It motivates you to push hard, even if you don’t sleep for a night or two.”

“We know each other’s strengths and weaknesses, so we could play into that,” Farahani added. “This weekend was an amazing experience. The atmosphere was perfect. The mentors from REALTOR.ca and Local Logic were a big help, too.”

The team said they were looking forward to getting back home and building a potential partnership with REALTOR.ca.

Participants of the REALTOR.ca Hackathon put their minds in overdrive for the weekend, but first, they had to earn some sweat equity.

During the kick-off event on Friday, October 12, the data scientists, coders and programmers in attendance took part in a teambuilding exercise all in the name of charity. In front of the teams of three were unopened boxes containing a MICKE Desk from IKEA. The challenge was simple: build the desk properly as fast as you can. 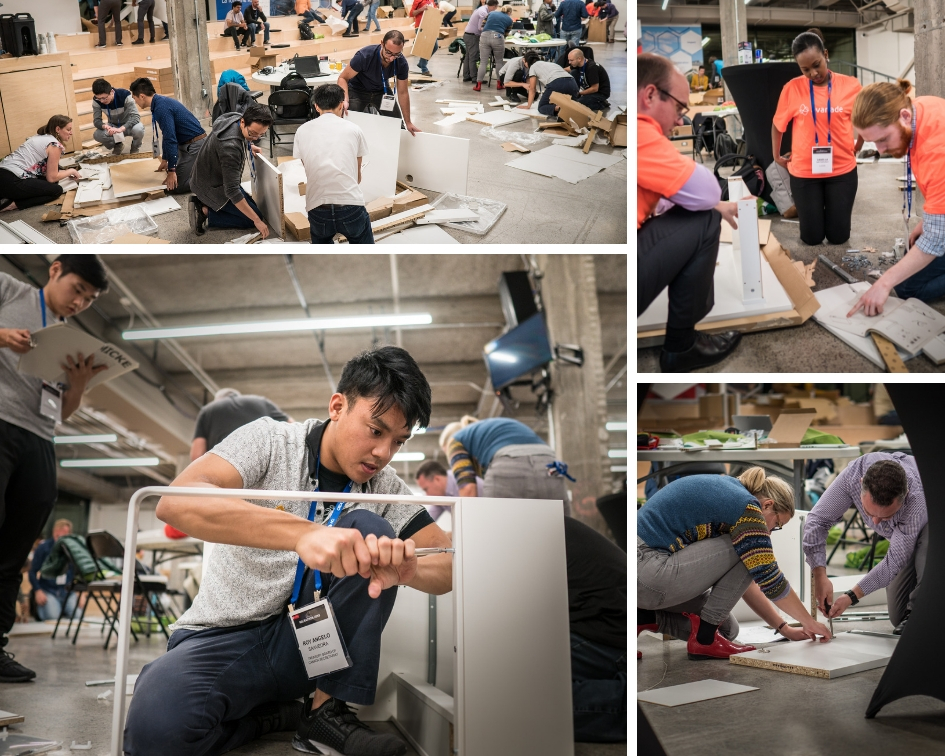 The winners of the challenge were presented with gift cards, but the real winner was Habitat for Humanity Greater Ottawa, who was gifted all the complete desks. In total, about $2,500 worth of desks were purchased by CREA, which in turn were donated to the Habitat for Humanity ReStore—a home improvement store raising money for the nonprofit organization’s well-known home builds.

This isn’t the first time CREA has held a fundraising event for Habitat for Humanity. During CREA’s Annual General Meeting last March, REALTORS® took part in a similar IKEA build challenge and donated $1000 worth of baby change tables and bookcases. Beattie said those items were gone from their Restore within 48 hours.

“It’s neat to think some of these desks could be in homes as early as tomorrow,” said Lizzie Lennox, Assistant Marketing Manager at CREA and organizer of the IKEA build challenge. “Supporting a charity is about being a good community member and that’s where we try to be as an association. Hopefully after today people are inspired to go and do some charitable work on their own.”

The winning team finished 10 minutes faster than their closest competitor. Krishna Malyala said he credits his team’s success to a “divide and conquer” mentality.

“Once you stop and take a look at what’s going on, you can assign someone to work on a part you’ll need later on,” Malyala said.

“I just bought a house using REALTOR.ca and I had to assemble a lot of IKEA furniture, so maybe that’s what gave us a leg up,” said Malyaya’s teammate Alexander Likholyot, co-founder and Chief Technical Officer at Planitar Inc.