How the REALTOR® community’s donations helped flood victims in N.B. and B.C.

Editor’s Note: In British Columbia, residents are experiencing the effects of hundreds of active fires across the province and evacuation orders have been issued. Many people are in need of urgent assistance. In solidarity with the British Columbia Real Estate Association and local real estate boards across the province, we are currently encouraging REALTORS® to donate to the Canadian Red Cross’ B.C. Fires Appeal. Click here to learn more and make your donation now.

Sharon Watts has seen the St. John River swell many times; it’s not uncommon for water levels to rise during the spring melt, especially after a hard-hit winter. It was uncommon—in fact, absurdly rare—to see the basement of her office turn into a swamp littered with waterlogged computers and destroyed documents.

Watts, the Executive Officer for the Real Estate Board of Fredericton and Area, thought their office—located three blocks away from the shoreline—would escape the wrath of the intense, historic spring flooding that hit parts of New Brunswick in late April and well into May 2018.

“The basement was under five feet of water and we had to close for two weeks,” Watts said. “All the pieces were in place to create the perfect storm and we sure felt the effects of that.”

Thousands of residents of the communities affected by the flooding, including the cities of Fredericton and Saint John, lost their sense of normalcy and security during this crisis. Hundreds had to leave their homes behind and seek refuge from the floods at emergency shelters. Some had to be boated out of their homes with nothing but the personal items they were able to stuff into their bulging backpacks. The Canadian Red Cross reports that—as of mid-August 2018, over three months on—69 individuals are still receiving temporary lodging.

While residents of New Brunswick were still dealing with record flooding and widespread damage, residents of British Columbia’s southern interior were hit with the worst flooding their communities had experienced in over 70 years. They, like their counterparts in New Brunswick, were forced to leave the fate of their properties to the discretion of Mother Nature as water levels kept rising and submerged homes.

REALTORS® across Canada were taking notice of the challenges these fellow Canadians were facing and, as usual, they wanted to help. On May 24, 2018, CREA launched a REALTORS Care® fundraising campaign in support of the Canadian Red Cross’ N.B. and B.C. Floods Funds. Within a few days, the REALTOR® community had raised a combined $11,413 for flood victims in these two regions.

“The ways REALTORS® responded to the floods appeal speak to how deeply they care about the communities they serve,” said Darlene Hyde, CEO of the British Columbia Real Estate Association. “The effects of the floods have been widely felt and it is inspiring to see so many REALTORS® aiding these communities during their time of need.”

How your support has made a difference

Here’s a quick snapshot of some of the ways your donations were put to good use: 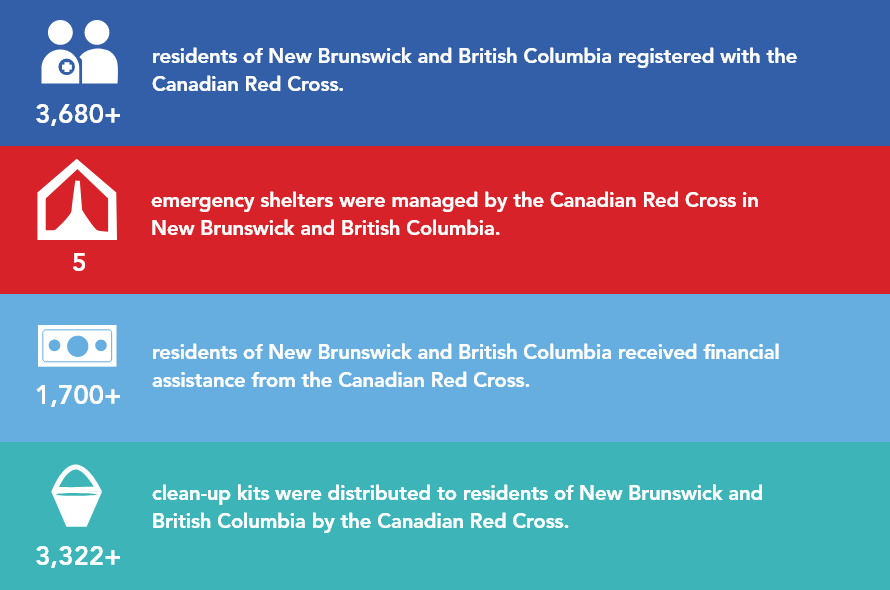 Thanks to generous donations from individuals, businesses, governments and groups like the REALTOR® community from across the country, the Canadian Red Cross was able to provide shelter to flood victims in New Brunswick and British Columbia while they had to evacuate their homes. They also assisted them with the challenges of returning home and making their homes safe and liveable again.

“The large donations, like the collective one from REALTORS®, mean so much to these people, these strangers,” said Dawn Fraser, community health coordinator at the Canadian Red Cross. “We’re very appreciative of the support we received in order to help people get back on their feet.”